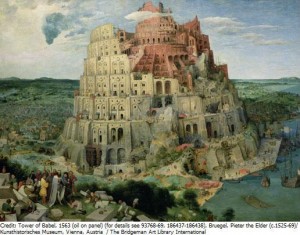 I started to question what I was taught about the Tower of Babel story, and it turns out I was not the only one.   Oxford Biblical Studies Online analyzes it and comes up a non-traditional and, from my point of view, much more positive view on it.   I will get to their argument after mine.

I was taught that the building the tower of Babel showed human hubris– people trying to build to the heavens.  Then God punished them by giving them many languages so that they could not get anything great done.   Lesson–  having many languages is punishment.   One language makes a coherent, productive society, just don’t use it to try to challenge God.

Where others saw this as positive lesson of coherence and humility, I saw this as celebrating monoculture, celebrating racism.   In the historical context, I think of Babylon (Babel) as a cosmopolitan city, and not dominated by the Hebrews.    Hebrews were outsiders, even a rebel movement, and could use this argument against a polyglot, diverse environment.    So this point of view was understandable, but not a positive lesson for me:  be all the same and we will succeed, being different is a punishment to reduce productivity.    This is not only a racist argument, it does not reflect productive societies.

But what if this is not what is meant by the Tower of Babel story at all?    Well an Oxford project seems to agree.

The King James Version is only 9 lines long, and please please just take a minute and read it.   It is shockingly short, and is worth it.

The Oxford Biblical Studies Online project has a very interesting reading of both the text and people’s readings of it over the years.

“The Oxford Biblical Studies Online provides a comprehensive resource for the study of the Bible and biblical history. The integration of authoritative scholarly texts and reference works with tools that provide ease of research into the background, context, and issues related to the Bible make Oxford Biblical Studies Online a valuable resource not only for college students, scholars, and clergy, but also anyone in need of an authoritative, ecumenical, and up-to-date resource.”

This analysis shows that over the years, that “hubris” interpretation was emphasized and expanded on through translations.

But a reading of the text seems to them to yield a different interpretation altogether: one that people gathered together into a city in fear, “lest we be scattered abroad upon the face of the whole earth.”(verse 4).   So it was fear not hubris.  God’s reaction was to observe they only had one language (v5), and gave them more languages and “thence did the LORD scatter them abroad upon the face of all the earth”(v9)    So, was this punishment or trying to get “Genesis” to happen– which was spreading people all over the world?     The Lord was certainly contradicting what those people wanted: a cloister of homogeneity into something else, but was it a punishment or His intention to get the human race to spread out?

So the Lord’s reactions could be interpreted quite differently if you thought He saw hubris and wanted to crush them, or if He saw fear of dealing with the world and wanted to help people spread out around the world.     If you thought your early ancestors were the original ones, and then their descendents created the many languages and peoples of the earth, then the latter interpretation where the Lord gave people the nudge they needed to spread out as a good interpretation.     And one celebrating diversity.

If on the other hand, one thinks the rightful language did not get its due, then having a wrathful God punish the hubris innate to those building productive cities would make sense.   This interpretation celebrates monoculturalism.

What I like about this musing is that it may fit with historical trends in that the text may have been interpreted as celebrating diversity long ago when the Hebrews thought of themselves as starting things off and leading to all other things.    But maybe as time went on the priority shifted to defining a people in a populated environment, and an environment of adversity, reinforcing traditions and language that will lead to longevity of the group.

Personally, I will take a “diversity is good” interpretation, and it is been interesting to find others have as well.