Driving a Tesla Model 3 is seeing the future, and it is like Driving an IPad and @ 4 cents a mile

Posted on September 8, 2018 by Brewster Kahle

Mary just got the Tesla Model 3 she has been waiting for– she is loving it.   And for a reason.  It is absolutely magic– driving it is like visting the future, now. All sorts of things have evolved, seemingly all at once, and evolved into a “why hasn’t it always been this way” kind of way.   Magic. 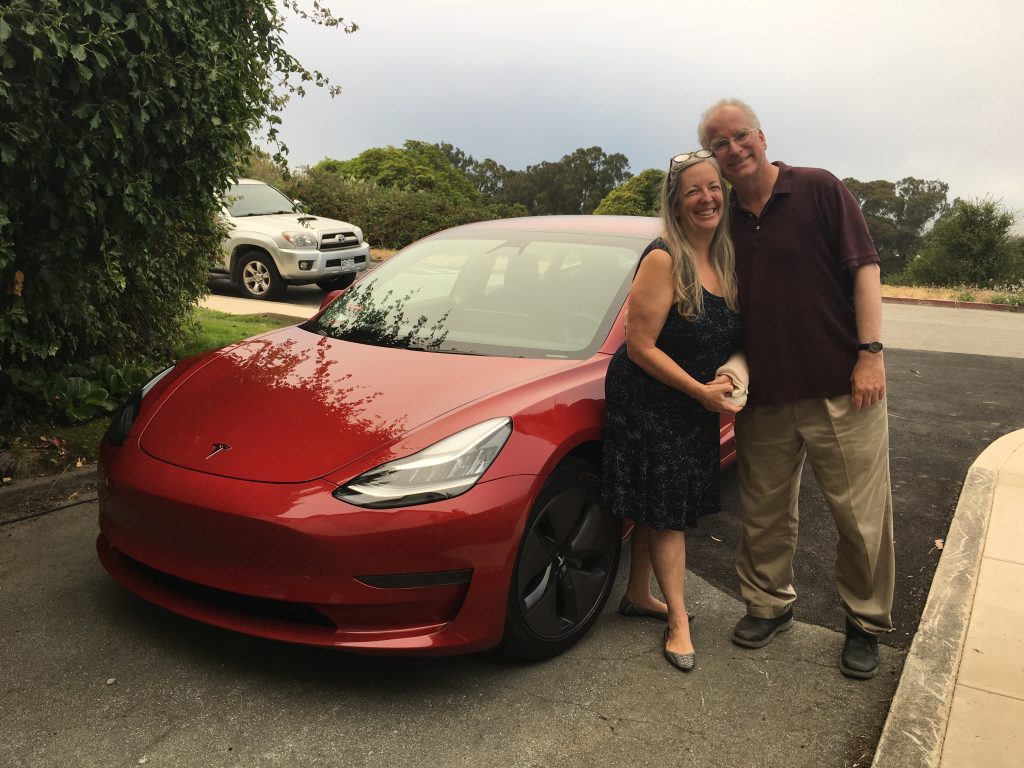 But it seems like driving an iPad. When I drive my 1996 Miata (which I love) I feel like I am in a simplified airplane cockpit: nobs buttons gauges– fun things that make me feel I am in control.  In the Tesla, there is almost nothing to do.  Let me explain.

To get in to drive, I walk up,  I open the door (it unlocks itself), buckle, my music starts to play by itself, put in drive and press on the gas. No key in the door, no key in the ignition, no starting the car, no turning on the stereo, no adjusting the climate control. The car does all of these things. I don’t need to put the headlights on, it knows if it is dark.  I don’t put on the windshield wipers, it knows. It connects again to my phone for my music to start playing (why can’t other devices know how to pair this well?)

I think the maps feature knew we were a carpool because it knows how many people are sitting there.

When I park (or it parks itself), I stop, I unbuckle and get out, it puts the car in park, it shuts itself down, it locks itself up. It is wild. Wild.

So I think of this as driving an iPad.  I, as the driver, feel kind of optional.  And they are explicit about the self driving features that are coming– I, as driver, am optional.

And it is a “connected device”.  It knows what I am doing, always connected to Tesla, always spying on me. But conveniently so. The app in my phone says exactly where the car is (to find it after parking), or how fast my wife is currently driving — spooky.

Driving this Tesla 3 is visiting the future, now.

Based on my calculations, it will go 250miles in San Francisco driving on a charge, and cost 4 cents a mile when charging at home.  (details below)

We just tried out the adaptive cruise control in Bay Area highway traffic.   It makes cruise control usable because it speeds up and slows down.  And knows if I am on a highway, so will only allow me to use it then.  Astonishing.

For me it is like the first time I used Altavista in 1995 to search this new thing called the Web, or an iPhone, or Google Docs– that wow factor, that “moment”.   Way to go Tesla.

Mary’s tesla reported it had 217miles left on its battery when we got back from going to Berkeley. Let me call that “battery miles” so I can distinguish it from “driven miles”.  When it is 80% full (its default), it has 270 battery miles, so we went through

The distance she went was from the house to the Archive over the Richmond bridge and back over the bay bridge. According to google this is approximately: 29.7miles + 17.2Miles plus a little bit to pick up brewster at the archive, say .5 miles = 47.4miles

That suprised me in how accurate that was given driving in SF has all sorts if hills and I was drove some of the time like a maniac testing how fast it accelerated (really fast).

The electricity cost of a mile is 4 cents a mile:

Therefore, with standard charging we should be able to go 250 miles at a cost 4 cents a mile for the electricity